Last week I received a review copy from the Amsterdam University Press: a new book on Piet Mondrian, Inside Out Victory Boogie Woogie, edited by Maarten van Bommel, Hans Janssen and Ron Spronk. Mondrian started on the painting Victory Boogie Woogie in 1942, but it stayed unfinished because of his death in February 1944. The painting was bought in 1998 from the collector Samuel Irving Newhouse at a whopping price of 82 million Guilders (approx. 37 million Euro’s) through a gift of the Dutch National Bank to commemorate the introduction of the Euro in the Netherlands. The acquisition caused a public outrage, and even the House of Representatives raised questions about the way it was acquired. But now the painting is on victorious display in the Gemeentemuseum of the Hague, and is by now a prominent attraction of the museum.

The book is the end result of a painstaking dissection of the painting in all its material aspects. This dissection started in 2006, in the first place to determine the condition of the painting, but soon a second objective crept into the research: the analysis of Mondrian’s working method. The research was partly done ‘in public’, behind glass screens, in a museum room. Like a corpse in a traditional anatomical dissecting room at university.

A preliminary report was issued in 2008 at the symposium. The final results in the book, the authors state, provide valuable information for the study of Mondrian’s complete oeuvre. They even discovered that Mondrian himself regarded the painting as his masterpiece, because he called the new pictorial insights he had acquired as ‘victorious’.

Now there are several issues to be aware of here in presenting a view like this, and in presenting the results in this way, which in their turn influence the public view on the painting.

The extremely technical results presented at the symposium in 2008 already raised questions among the people present about where the research was actually heading. What would all these minute technical details in the end say about the painting and, even more, about the painter? Would we, as the public, get a better insight? Would we be charmed by it into really, for the firs 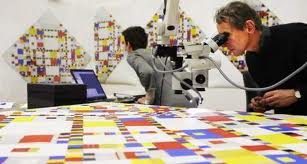 t time ever, based on solid evidence, understand Mondrian’s motives for working the way he did? In other words: would a wider public finally come to like and love the extreme subtlety of the brushwork and the shades of primary colors, Mondrian’s compositional choices, his highly intuitive approach of his compositions and his intense internal struggles to achieve visual harmony, his individual views on how modern art should look like and should function in society, and on his true inspirational sources?

You won’t read it in the book, a hydrocephalus of technical analyses. The book is a clear statement of the dominance of an Anglo-Saxon view on art history – well, at least in the Mondrian reception. Even though the ‘Greenbergian’ view on art – ‘you see only with your eyes’ type of art analysis – is attacked, it is so only marginally. This stance is illuminatingly but stunningly phrased by Marek Wieczorek in the book. This author writes about ‘a parallel current on research on Mondrian’ next to the one in the book, ‘which generally is associated with a European tradition’, which ‘uses the artist’s texts as the iconographic key to secret, symbolic meanings seemingly hidden behind lines and colors. The Victory Boogie Woogie seems not to have been susceptible to it, this most American of Mondrian’s paintings.’

Excuse me? Wouldn’t it then be time to re-evaluate such a stance? Fact is: Mondrian was 72 years minus 4 – the years he spent in America – indigenous part of European culture. But no. It would revive the never-ending discussion about the influence of theosophy on Mondrian’s work. The word ‘theosophy’, or even any mentioning of anything on the spiritual side, is omitted from any analysis whatsoever in the book. Wiezcorek happens to be an American professor of art, who obtained his MA in Amsterdam in 1970 (!). It is truly unspeakable that The Hague Museum, itself as much rooted deeply in Europe culture as Mondrian, still lets itself be dominated by Anglo-Saxon approaches to art history.

Fact is, many artists like Mondrian became member of the Theosophical Society (and even a multiplication of them was never a member of any organization, but no less influenced by western esotericism). But if one closely studies the membership lists, Mondrian turns out to be one of the very few artists who stayed a member all his life! This was an active deed: it involved paying a yearly contribution. If one did not pay, one was dropped from the membership list. Apart from the fact that one could actively resign. The Theosophical Society, one could presuppose, was Mondrian’s ‘modern church’, after he was dropped by the Reformed Church for not paying contribution, and from which organization he didn’t even care to resign. The importance of this, and the fact that his legacy consisted of only a handful of books which were all esoteric, should at least make art historians question the importance for the later work. Mondrian did not flee impending Nazi oppression for nothing in 1938. 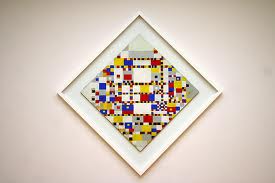 Art history seems to be very resistant to incorporate into its research methods what is already common knowledge in religion studies: namely, that western esotericism is and always has been an integral part of western Christian culture. Any art historian should be well aware of the fact that artists inspired by western esotericism tended to disguise their esoteric sources and translate them into a more common artistic idiom to reach a wider audience, with the same aim Mondrian had: to make the world a nicer place. The clearest examples come from freemasonry with its overt architectural symbolism. There are obvious examples, in which discussion papers of lodge meetings on architecture were stripped from specific Masonic terminologies and were formulated in more traditional architectural phrases, and thus became a general source of inspiration for other artists. Mondrian did the same in his essays in the magazine De Stijl. That he did not write many theoretical justifications later, does not mean that they were not in his head. Writing was an extremely arduous task for the painter. It kept him from painting. A painter writes with color, line and plane.

Inside Out Victory Boogie Woogie again stresses vehemently that Mondrian was an artist in the first place. ‘Theory is preceded by art,’ Mondrian himself said. Yes, but this does not exclude that Mondrian includes theory in his sentence, which implies that theory helped him formulate his artistic aims, and in formulating theoretical viewpoints he (re)shaped his art. Disregarding the theory bit leaves only a ‘Greenbergian’ interpretation - ‘the outside’, whereas Mondrian quintessentially painted from ‘his own inside’. The book thus stays firmly and exclusively on – in Mondrian’s theosophically inspired idiom – the material plane, whereas Mondrian’s life-long aim was to make people aware of the innate expressive qualities of the material world and to focus on these ‘hidden powers’.

Mondrian himself simply felt ‘victorious’ about his painting, because he had found new compositional and painting methods, through which he could continue expressing his views on the essence of modern art. In 1943 he wrote to the art historian Sweeney that he had discovered that a contour is also a plane, and this opened a whole new interpretation of pictorial elements for him. Strange view, actually, because almost exactly 50 years before him the Symbolists, whose theories were also known to Mondrian, had postulated likewise, and exactly because of such insights they had paved the road for modern art.

If Mondrian would not have attracted pneumonia in 1944 and if he had be treated with antibiotics – it is hardly thinkable that he received such treatment, because during the war penicillin was used almost exclusively for military aims – he would probably have survived for some more years and might have discovered even other ways of expression. And would have felt just as ‘victorious’ about it. Ever again.

All pictures are purely educational illustrations to an academic review of the subject.