The State Museum of Oriental Art in Moscow

Greek with a Russian soul

The State Museum of Oriental Art is one of the largest cultural educational institutions of the Russian Federation. It is the only museum in Russia specialized on storage, research and popularization of works of art from China, Korea, Japan, South-Eastern Asia, ex-Soviet East -the Central Asia (Uzbekistan, Tajikistan, Turkmenistan, Kyrgyzstan and Kazakhstan), Far East (Chukotka), the Caucasus, and expositions of Roerichs’ heritage. 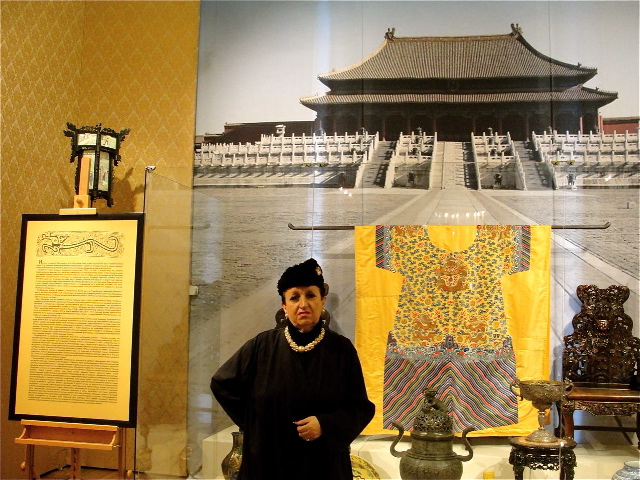 On the grand staircase of the museum appears Tatyana Metaxa. It is just impossible not to recognize her if you have ever seen a photographic image of her. The remarkable appearance and dress manner. She is spontaneous and pleasantly simple in dialogue. ”Well, what do you want? Do you want me to give you an interview? I will give you an interview.”

Why do you have different family names?

-Because the sister of George D. Costakis, Marika D. Costakis married Fedor Kh. Metaxa and their son Khistofor F. Metaxa is my father. They were all Greeks who came to Russia at the end of the 19th- begin 20th century in search of a better life and future. It is worth to mention that my grandfather Fedor Kh.Metaxa was of influence on the future famous art collector Costakis. My grandfather was an educated person and knew 17 languages.

How many languages do you know?

-Unfortunately, I do not. I did not inherit that.

How about the Greek language?

Did they speak Greek in your family?

What type of relationship was in your family?

-Relationships within the family were very warm and close, we gathered together at home in Moscow and on dacha in Bakovka. We celebrated all holidays together Easter, Christmas, Victory Day. I was born in 1945. Victory Day is the most important holiday for me.

That means that you have been very often at Costakis’ place and knew very well his collection?

-You have said that I have been there, that sounds even strange to me. He was my uncle Yura. His house was always open for me. I slept there under "Lilies of the valley" of Mark Shagal, which is now at the Tretyakov Gallery. 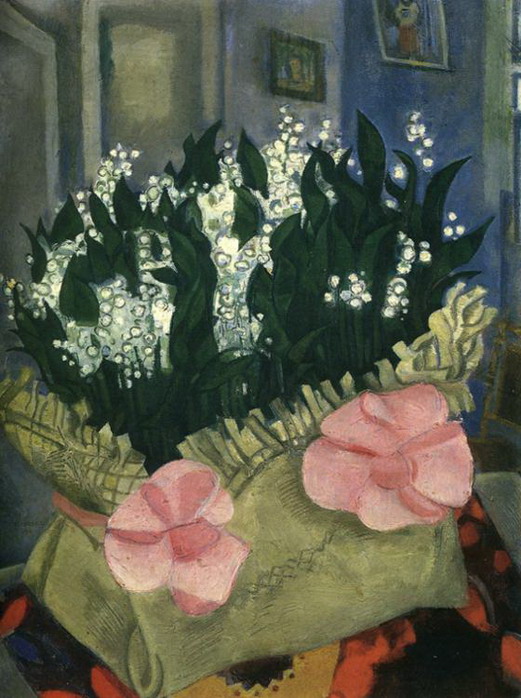 M. Shagal. "Lilies of the valley"(1916)gift of G.Costakis to the Tretyakov Gallery

Do you remember Anatoly Zverev?

Did Zverev paint you?

-Zurab Tsereteli painted me. There are three portraits of me in his gallery on Prechistenka Street.

You are the director of the State Museum of Oriental Art since 1969?

-Are you from the Moon? At first, I’m not the director.

In mass media they call you that.

-They don’t really give a try to understand. I’m the first deputy director. I started as a museum guide. I went through many different stages before I became who I am.

But you are working in this very museum since 1969, aren’t you?

Fine. Tell me, please, did the situation in the museum business changed a lot if you compare it to the soviet times, particularly, as far as it concerned organization of the exhibitions, logistics and receiving of museum objects, financial situation. Is it easier or more difficult to work now?

-Some things are easier. Some are more difficult. Some things are gone for good but there are others instead. We try to modernize our museum. We are planning to show Actual Art. We have now audio guides, and a video tour. We try to earn money with exhibitions, we have a museum shop and last but not least we organize lectures and workshops.

Being in such a close contact with the art collector G.Costakis and being acquainted with his collection from the earlier childhood, did it not infect you with a virus of a collector?

-I do not consider myself a collector. I have a few works of different artists, but it is not a collection. A few years ago, before the époque of glamour, in the time of gloss, the journal Elle, if I’m not mistaken, named me the collector of the oriental dresses. I was laughing and even showed the article to my mother. Help God, I do not collect those dresses I’m wearing them.

Here I cannot pass by without asking you about your dresses and personal style. You are dressing very extravagant/flamboyant. Did you dress likewise also in the beginning of your career when you worked as a museum guide?

-No, of course, not. The highly polished style came with the years. Today I’m dressed in the style as I name it “Anna Karenina”. It is a reflection of my love for the 19th and the beginning of the 20th century. I adore the literature of that time. I love to visit such places as Yasnay Polyana (the estate of Russian writer Lev Tolstoy). I love the Crimea, Koktebel.

Don’t you want as soon as you are at home to take away all those dresses and just put on a good old morning gown or housecoat?

-Not at all. I’m wearing all that at home as well.

Tatyana.Kh. , has the art life in Moscow changed a lot during the last 10 years? Can you name something outstanding?

-Yes, most certainly. The art life in Moscow became very intense; the choice is enormous for any taste. But I like very much, as before, the Museum of Fine Art named after Pushkin on Volkhonka and the museum of Pushkin on Prechistenka Street, the museums of Kremlin. My good friend is the contemporary Russian artist Oleg Kulik. I have a young husband who is also an interesting painter Nikolay Kostromitin.

She points at his works. 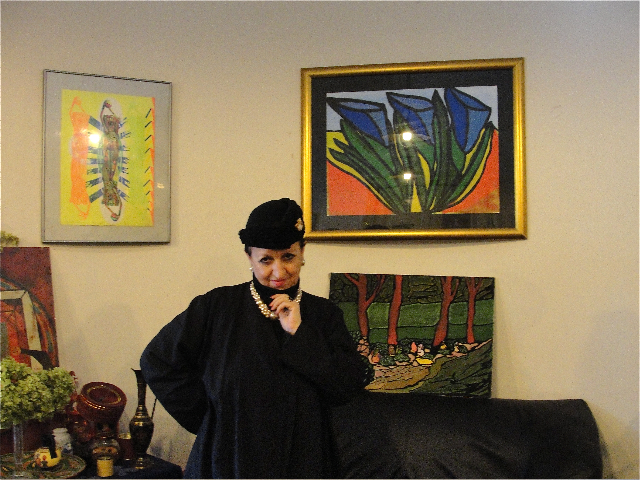 What are you reading now?

-I read a lot. I read since I was 6 years old. Yesterday I finished the book of N. Berberova “Italic mine”...

What can you say about modern literature? Pelevin, Prilepin etc., for example.

-I met many of them and know them in person.

That’s wonderful but what about their writings?

-I liked Sorokin’s “Snow storm”. It seems to me that I liked Pelevin’s “Chapaev & emptiness”

What about writer Eduard Limonov?

-It is not my cup of tea. I prefer the middle, peaceful way.

You are talking about his political nature and activity but my question is about his writings. He is an outstanding writer.

-I cannot separate one from another. I’m not able to see him without/beyond his political context. I think, if you want to change the world, start with yourself.

Are you a believer?

-It is an interesting question. I’m interested in all religious denominations. I’m baptized. My sister Natasha and I were baptized in the church in Perkhushkovo. I have a great respect for true believers and churchgoers. But I think, that priests should be softer, more human and tolerant.

What is you attitude towards the controversial political figure of Dalai Lama?

-I met with his Holiness the 14th Dalai Lama. He made a favorable impression on me.

Are you happy? You know, that question of Dostoevsky, he asked himself and others, direct and through the heroes of his novels about happiness. In other words, do you enjoy life?

-I like life. I’m looking at the world through rose-colored glasses. Some things I don’t notice and others I see in a pleasant light. After all, I’m working in the place I love.

It is very cozy at the office, with a soft divan, a Chinese porcelain teapot with green tea on the table, a big chocolate box filled with sushki (traditional Russian tea bread rolls with a hole in it), plants, pictures and an artistic photo portrait of the hostess.

Last question. What is your favorite museum object here in the Museum of Oriental Art?

The State Museum of Oriental Art

[1] George Costakis (1913-1990) was a passionate art collector. He collected paintings by artists of the first Russian Avant-garde such as: Kazimir Malevich, Vasilii Kandinsky, Liubov Popova, Vladimir Tatlin, Aleksandr Rodchenko, Ivan Kliun, Solomon Nikritin, Olga Rozanova, Varvara Stepanova, Nadezhda Udaltzova, Mikhail Matiushin, Gustav Klutsis etc., and Russian expressionist artists such as Anatoly Zverev etc.. He developed an interest in Russian art from the beginning of the 20th century and came into contact with the artists and the artists' families, from which he bought their works. He bought paintings, which were considered by many to be rubbish. Now his collection is considered priceless. At the end of 70s, Costakis and his family left the Soviet Union under circumstances. Before his departure, he donated 80% of his collection to The State Tretyakov Gallery in Moscow. The rest of the Costakis collection is now at the State Museum of Contemporary Art in Thessaloniki.